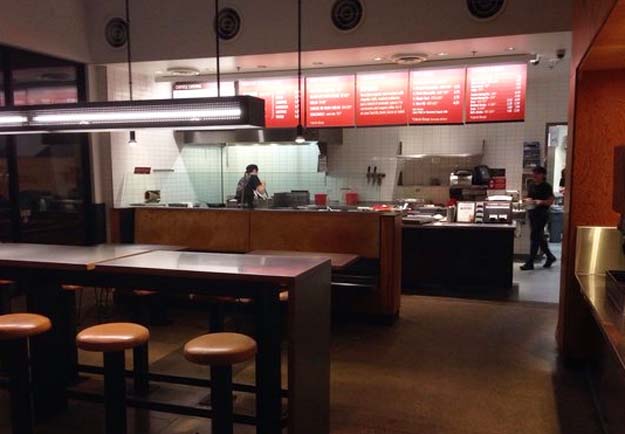 I ate at a Chipotle for lunch earlier this week. I am still here.

I didn’t do this on a dare or a death wish. It just so happens it’s an easy walk from the Barnes and Noble I had to visit on my lunch hour, and didn’t even think about the recent food poisoning incidents until I was already inside the place and about to order.

I swear, it was only a year ago that I stood in the line that was out the front door at this very same Chipotle and texted my wife to say “Let’s buy stock in this company. Today!” On this recent visit, I had apparently entered the E. Coli Twilight Zone. There was one person in line in front of me. One person. Thankfully this gave me a few moments to check Google on my phone for a Chipotle food poisoning update, and there were plenty of stories. Cases had just been reported reaching Illinois after a flurry of them in the Pacific Northwest. A few days later, more poisoning would hit some college students in Boston, and I caught a few minutes of the thin, mild-mannered company CEO Steve Ells on CBS This Morning, apologizing and insisting changes were being made to make Chipotle the “safest place to eat.”

I looked up from my phone. The young Latino counter person was ready for me. I lowered my voice just a little bit.

“Which meat is safest right now?”

She gave me the glimmer of a smile. “Oh, they’re all safe. What can I get you?”

I paused. Ran some junk stats through my head about actual chance of contamination, similar to the ones that measure your chance of being booked on a doomed Princess Cruise, then took the plunge. They had my favorite item, shredded carnitas, at this particular store; most of the ones near my house hadn’t had carnitas for months for unspecified reasons. I talked her and the server beside her through my order, which as usual, they completed at rapid speed, added a bag of chips and bottled water, and helped myself to one of at least fifteen empty tables.

I ate a little slower than I was accustomed, spearing each pork morsel with my plastic fork before carefully inspecting it. The food was as delicious as it usually was, yet even though it was the busiest hour—between noon and one—there were never more than a dozen other people in the place. More than anything, this made me deeply sad.

I can’t vouch for what it’s like to work at a Chipotle, and this store had obviously let a few people go of late, but as a customer, it’s been one of my favorite franchises for years. Their fare has always seemed healthier than what you find at other “fast food” eateries, they’re extremely upfront with their ingredients and calorie counts, and despite occasional reminders to keep my fingers off the counter glass and a need to catch them before drowning my order in a small lake of hot salsa, the efficiency of their ordering system never fails to amaze.

I wouldn’t wish E. coli on anyone, but why did this have to happen to a new, successful and downright likable franchise like Chipotle, as opposed to an Arby’s, Shakey’s, or a homophobic Chick-fil-A? My wife heard my sadness the other day and said, “Don’t worry, they’ll be back.” and I saw their stocks just rose again after another encouraging public statement by  Steve Ells. I’ve shown my support by braving their front door this week, so now I feel I can kick back for a little while. You know, at least until I notice their line getting long again. I can certainly be adventurous at times, but hell, no sense pushing my luck.