On New Year’s Day night, TCM ran a marathon of classic Hitchcock movies, all in pristine, restored hi-def. Vertigo, Shadow of a Doubt, The Man Who Knew Too Much and The Trouble with Harry all made the list, but for its 112 minutes, Rear Window captivated me like it never has before.

The 1954 release is simply a perfect film. In a medium that essentially requires viewers to sit in a dark room and watch other people’s lives, it’s about a man physically trapped in his New York apartment and spends all his time watching other people’s lives. The art direction and Hitchcock’s manipulation of it is beyond brilliant, giving us just enough visuals and sound from all of the apartment courtyard’s mini-dramas to keep us as intrigued as Jimmy Stewart is.

I won’t elaborate on the particulars of the story, seeing most of you have seen the film, but I thought it would be fun to delve deep into the Internet and provide portraits of L.B. Jeffries’ colorful and memorable neighbors, because they’re as much a part of the story as Stewart, snarky Thelma Ritter, evil Raymond Burr and the ravishing Grace Kelly are…

GEORGINE DARCY (Miss Torso)
Darcy, who was born in Brooklyn and urged by her mother to become a stripper to “make a fast buck”, studied ballet and worked as a model before appearing as the voluptuous, forever dance-practicing neighbor directly across from Jeffries’ apartment. She was paid just $350 for her work in the film, and had a spotty acting career from then on. In 1962 she played Madge, a “dancing firestorm” in the Chubby Checker movie Don’t Knock the Twist. She had a few TV roles after that, but died of natural causes in Malibu in 2004 at age 68. 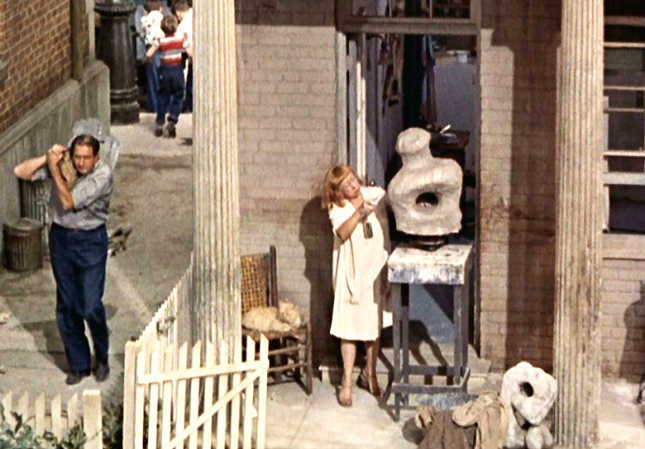 JESSLYN FAX (Sculptor with Hearing Aid)
The dotty artist who lived directly below Miss Torso was played by Canadian actress Fax, who was a “short, dumpy, cherubic character actress,” according to Wikipedia, and had small roles in The Music Man and Kiss Me Deadly following her appearance in Hitchcock’s film. She also occasionally served as comic foils to Jack Benny and Lucille Ball. Born in 1893, she died in Hollywood in 1975.

ROSS BAGDASARIAN (Struggling Composer)
Bagdasarian, known for being the friendly acquaintance of Hitchcock in the director’s Rear Window cameo scene, was an actual pretty successful composer who wrote “The Chipmunk Song” for Alvin and Co. and specialized in “catchy, hummable melodies.” As an actor he appeared in 20 films, including Hot Blood, Three Violent People, The Proud and Profane, and The Girls of Pleasure Island. He was just 52 when he died in Beverly Hills in 1972.

FRANK CADY (Sleeping Man on Fire Escape)
Cady, who died in Oregon in 2012 at the age of 96, may have been the most successful of the courtyard’s supporting cast. Most people remember him as Hooterville general store owner Sam Drucker on the twin TV series Green Acres and Petticoat Junction. Before playing the husband who slept with his wife on one of Rear Window’s fire escapes to beat the heat—and later got caught in a rainstorm—he appeared in a whopping 42 other movies, most in uncredited roles, including D.O.A. and The Asphalt Jungle. 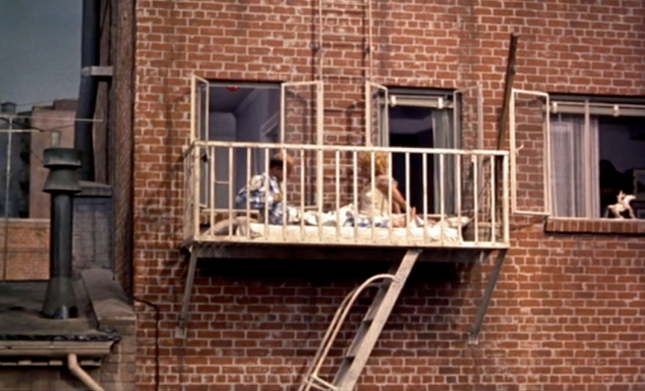 SARA BERNER (Sleeping Woman on Fire Escape)
The neighbor with the only true speaking part in the film, Berner was a successful voice actress who worked a lot in the 30s and ‘40s, almost exclusively in animation, and did the voices for cartoon characters Andy Panda, Chilly Willy, as well as the mouse who “danced” with Gene Kelly in Anchors Aweigh. In Rear Window, she lowers her and her husband’s little pet dog in a basket every day, and when Raymond Burr’s character strangles it later in the story, gives a shrill lecture to everyone in the courtyard about human decency that’s virtually the only strained moment in the film. Bernier lived to be 57 and died in Van Nuys, CA in 1969.

JUDITH EVELYN (Miss Lonelyhearts)
Evelyn, who beautifully played the sad single woman in the bottom apartment who restrains herself from overdosing on sleeping pills when she hears the gorgeous piano number played by the single composer upstairs, appeared in a handful of movies after Rear Window, including Giant and The Tingler with Vincent Price, but had a full career of TV work before passing away in New York at age 54.

RAND HARPER & HAVIS DAVENPORT (Newlyweds)
Harper, the hunk who carried his new wife across their apartment threshold in the first few minutes of the movie, then lowered the window shade for two or three days, was mostly a TV actor who had a recurring role on Sea Hunt with Lloyd Bridges, along with small parts on Perry Mason and Gunsmoke. At 87, he is the only Rear Window resident to still be alive. Davenport only lived to be 42, with parts in just two other films, Scandal Incorporated and A Star is Born. The newlyweds’ late scenes, in which it’s depressingly clear they are threatening to turn into Raymond Burr and his disappeared wife, are deliciously ironic.

Which brings us finally to…

IRENE WINSTON (Mrs. Emma Thorwald)
Lars Thorwald’s unfortunate bedridden wife, who appears to be mocking her husband in a few early scenes before ending up in various parts of the East River, was a New York native with a 1940s career in radio who later wrote for television. Like all of these supporting apartment players, her pantomime from afar was exceptional, and helped create one of the greatest underrated ensembles in cinema history.

And now, as Grace Kelly’s Lisa Fremont might have said as she coyly lowered Jimmy Stewart’s blinds, “Show’s over for tonight…”

One thought on “Room with a Rear View”