Sorry I haven’t posted a blog for a while. Life duties and the political state of the country has had me in a slight creative funk, and the last thing I’ve wanted to do is join the 26,343 others writing about this administration.

The other day, however, I began to think about the Civil War. Maybe because we could very well have another one if our toddler-in-chief is booted from office. Or maybe because my wife was watching the Ken Burns documentary again recently, and the melancholy sound of Jay Ungar’s “Ashokan Farewell” wafting down the hall put me in the appropriate mood. But I suddenly remembered how much that war meant to me when I was growing up.

From 1962-1965, there was a Civil War Centennial going on in our culture. Despite a superb short film version of “An Occurrence at Owl Creek Bridge” that Rod Serling featured one night on The Twilight Zone, Hollywood tended to steer clear of the subject, but manufacturers of children’s entertainment were quick to pounce. 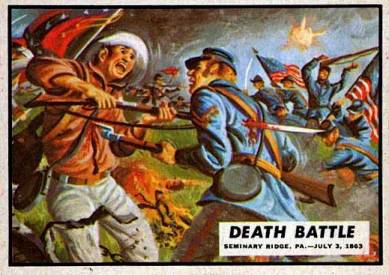 To begin with, my friends and I collected Civil War bubble gum cards. Years before “Bonnie and Clyde” and “The Wild Bunch” hit the big screens, these cards were the first graphic depictions of violence many of us ever saw. Released by Topps in 1962—and remaining one of the most collected trading card sets of all time—no color rendering of horrific battlefield death was left on the drawing board. “Vicious Attack”, “Wall of Corpses” and “Flaming Forest” were just a handful of the vivid hand-painted scenes by Norman Saunders, Maurice Blumenfeld, and Bob Powell. I don’t think I had more than three dozen of the 88 collectible cards (which I would bet $20 my mom threw away when I was at school) but the ones I had certainly left an impression, and my friends and I giddily ranked them by gore factor as often as we could. 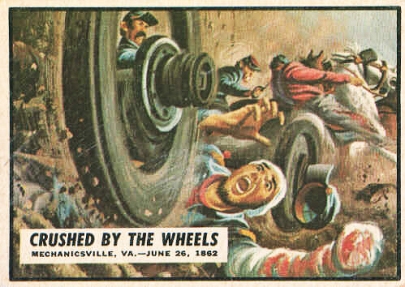 Which probably explains why I was soon clamoring for a “Civil War set” for one of my birthdays. Released by Marx, the set came with a few hundred pieces, including blue and grey soldiers, a stone bridge, a plantation(!), cannons, fences, wagons, a few horses, and characters for Lincoln, Grant, Lee, and Jefferson Davis. Many a summer backyard, either at my house or a friend’s, would double as a vast miniature killing ground for the infamous Battle of Yarmouth Street or Massacre on Drury Lane. And I would bet another $20 that my mom threw the entire set away when I was at school.

Less than a decade later, deadly doings in Vietnam would take over the TV news and our political consciousness, and my brief fascination with the Civil War went into hiding. We all learn about history in different ways; a friend of mine n Maryland is an avid Civil War collector, attends memorabilia shows, and once showed me his actual piece of a Gettysburg fence, still pockmarked with bullet holes. I was perfectly content with my grisly bubble gum cards and little plastic soldiers, but the most catastrophic war to ever occur on our shores would forever stay embedded in my view of the world. Here’s hoping it stays embedded.

One thought on “Ain’t Nothin’ but the Blues and Greys”