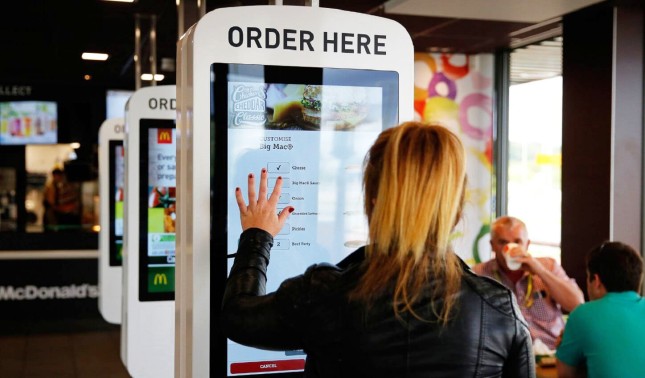 Sometimes when I’m rushing to get to work and haven’t had time for a proper breakfast at home, I’ll stop at a fast food place near the office to nab a small, improper one. But the other day I walked in a McDonald’s that had apparently been recently remodeled, and found myself staring at an “ordering kiosk”.

It isn’t that I’m averse to using new technologies to make my life easier. (Remember fast-forwarding to a movie scene on a VHS tape? Standing in line for fifteen minutes at a bank on your lunch hour to deposit a check?) But one of the joys of stopping at a McDonald’s at 7:45 in the morning has been ducking inside to avoid the nine cars in the drive-thru line, then purchasing and getting my to-go order in less than two minutes.

Per usual, there was practically no one waiting to order inside this particular McDonald’s—just me and a sketchy, possibly homeless guy in front of me wanting a coffee. The young woman working the register, in an attempt to share the wonders of modern push-button kiosk use with Sketchy Guy, had to come out from behind the counter, walk him through the dizzying amount of steps he had to go through to buy his coffee on the kiosk board, then return to her place at the register. It was absurd.

“Hey, do I have to use that thing?” I asked the woman, “Because I really prefer to talk to people.” She gave it some thought, maybe afraid of being reprimanded by her boss or an invisible but all-seeing McDonald’s board of directors, then quickly shook her head. “THANK you,” I told her, and placed my order at the register. “There’s just too much of this automated stuff in the world already.”

I mean, there really is. I tried to place a take-out order at a local Thai joint the other day on the phone, something I’d done with them numerous times, and instead was transferred to some kind of multi-eatery food ordering call center. Whenever I call a customer service number and get a friendly robot (which is basically all the time now), I hit the “O” button for an operator as quick as possible in search of human contact. While I’m waiting to talk to a living being, the robot will still try to steer me to a web site rather than keep me on hold, but many times the question or matter I have really needs to be discussed, not reduced to a handful of keyword responses. Social media has succeeded in making us less conversant than ever, and I’d rather not contribute to speeding the decline.

McDonald’s is saying that their new kiosks will “speed up” the ordering process, but I saw no evidence of this the other morning with just two of us in line. What if there were twenty people and half of them were kids or simply kiosk-challenged? Wouldn’t it become something like the cluster of confusion in front of many mass transit ticket machines that have caused me to occasionally miss trains?

No, the only benefit to McDonald’s I can see with these kiosks is finding a new way for the company to eliminate human employees. For that reason alone, I intend to fight them until they drag me away from the cold, dead counter.