I have a strange pet peeve about The War of the Worlds movies.

The 1960 version of The Time Machine, from another H.G. Wells novel, was my favorite film as a kid, and I swear I paid to see it 17 times. Intrigued by all things Wellsian, I then “read” his amazing and terrifying 1898 story about a full-fledged Martian invasion of Southern England in comic book form, one of a series called Classics Illustrated that introduced kids to famous literature back then. I hadn’t yet seen George Pal’s 1953 movie version with Gene Barry which was set in Southern California, but the comic book scared and engaged me enough that I picked up the original novel soon after that. 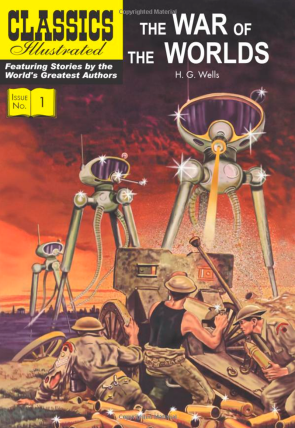 Aside from being an incredibly vivid, graphic, and moving tale recounting a series of days that nearly erased humanity, the best thing about the book is that it’s set in Victorian England. The images of Martians walking through the idyllic English countryside inside towering, metal tripods and laying waste to everything is what makes the book so unique and startling. It’s like a Merchant-Ivory drama with heat rays. Wells’ creation of having the Martians shoot from their planet in a series of cylinders that arrive as meteors is also brilliant, especially given the lack of science fiction writing at the time—outside of Jules Verne.

Imagine my dismay, then, when I finally watched Gene Barry and girlfriend Anne Robinson learn of the first Martian meteor while dancing at a local small-town sock hop, and that the invaders unleashed their heat rays on L.A. County from cheesy, low-flying machines as opposed to tripods. Sorry, that wasn’t even close to the book I had read.

Neither was Steven Spielberg’s mega-budget version from 2005. While he did manage to nail the tripods perfectly (top photo) and create some terrifying CGI set pieces, the film was set in modern New Jersey with Tom Cruise, featured a father-son soap opera and traumatized Dakota Fanning, and never even identified the aliens as Martians. (Seeing that Orson Welles’ notorious radio version from the late 1930s was also set in northern New Jersey, the writers probably felt they were paying some homage to that.)

Back in 1998, a War of the Worlds TV series lasted for two seasons, and I’m glad I missed that one altogether. Apparently the bacteria that saved civilization from the Martians in 1953 was destroyed by radiation, and the Martians then came back to take over human bodies, a la Invasion of the Body Snatchers. Nice try.

So now we’ve been graced with yet another TV series of The War of the Worlds, a British, “modern re-working” available on the Epix Channel with Gabriel Byrne and Elizabeth McGovern. This one uses the name of Wells’ book, but is so far removed from the original concept that I’ve already lost interest because after three episodes it’s devolved into a post-apocalyptic character slog not unlike The Walking Dead. Sorry folks, having it take place in modern-day London doesn’t quite excuse this decision. 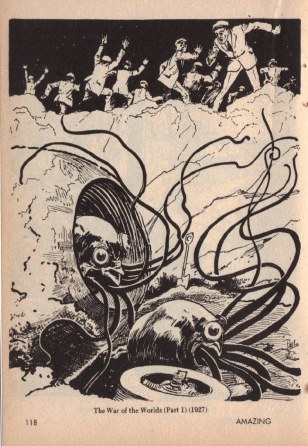 I don’t mean to sound like a line from a bad action movie, but these producers just don’t get it, do they? The accompanying illustrations perfectly capture the contrast between everyday life and alien horror that Wells’ novel details on practically every page. Having re-read the book again recently, what comes through even more now is the way citizens learned of alarming news back in that era. There was no television, no social media, or even telephones. The coming of the Martians, as word slowly spread by word of mouth from one quaint village to another, was scarcely believed. If a filmmaker ever makes a version that is genuinely true to the cinematically-written novel, they could deliciously underline this irony—from the sand pit on Horsell Common to the rubble in London.