I love Mia Farrow. Dug her as an actress since Rosemary’s Baby, and she’s totally responsible for making my second favorite Woody Allen movie (Purple Rose of Cairo) work.

In the last few years I’ve been following her on Twitter, and have been amazed at the bottomless passion she brings to fighting global and domestic human rights violations. Check out this recent pictured tweet. Whenever I hear someone make a Cosby molestation joke on Bill Maher or Jon Stewart or on some late-night venue, half the studio audience reflexively groans, as if to say, “But he’s Bill Cosby!” Mia just comes right out and says fuck you, you’re a pig, and you don’t deserve to be working anymore. 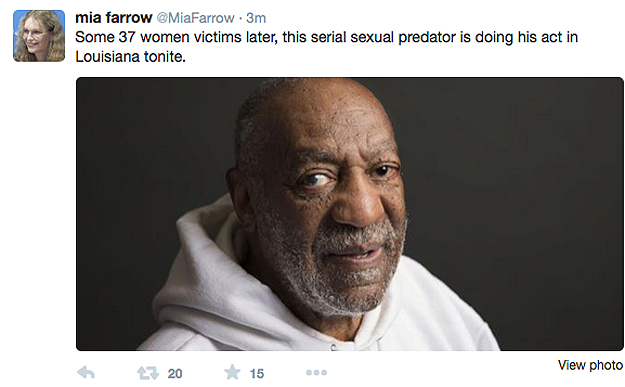 But she isn’t in attack mode at all times, either. Many of her tweets are photos of her serene Connecticut backyard and adjacent lake, or inside her house or of her adopted kids. As a celebrity she is way more open than most, and never comes across self-serving. I haven’t read her 1997 memoir What Falls Away, but still get a rich sense of her as a spirited human being who will do anything to help the planet. She’s not only a UNICEF goodwill ambassador and advocate for children’s rights, but has worked extensively to fight polio, which she survived as a child, and is one of the major activists for Darfur.

In case that isn’t enough, her 27-year-old son Ronan Farrow is an American activist, journalist, lawyer, and former U.S. government advisor. And if that isn’t enough, Mia had to survive two ghastly relationships with Frank Sinatra and Woody Allen. And to top it off, she just turned 70 on February 9th.

So yeah, I love Mia Farrow.